FOUR STEPS TO TAKE IF YOU FIND A DEAD BIRD

You find a dead bird. What do you do? Here in Contra Costa County, the first step is to call 1-877-WNV-BIRD (1-877-968-2473) or go online to report the bird to the California West Nile Virus Dead Bird Hotline. As you submit the information, the Hotline operator determines if the bird could be a good candidate for testing.

The District receives information about birds deemed suitable for testing soon after the report is submitted. We assign a District employee to pick up the bird.

Once the bird arrives at the District, the laboratory staff inspect the bird to determine if the reported information is correct. On occasion, the bird is not the species that was reported and cannot be tested. Most birds, however; are the correct species and can be tested. Our entomologist performs a preliminary test and then sends the bird to U.C. Davis for confirmation of West Nile virus infection. U.C. Davis typically informs the District if the bird had West Nile virus within a week.

Once the District receives confirmation that a dead bird was infected with West Nile virus, they post the results on the District website and District employees place mosquito traps in the neighborhood near where the bird was reported to collect mosquitoes to test for virus if needed. They increase efforts to find young larval mosquitoes in nearby water sources and we let the person who reported the bird know that the bird tested positive for West Nile virus.

A Few of Your Questions Answered

What Makes a Bird a Good Candidate for Testing?

When Will the Bird Get Picked Up?

What if No One Calls Me Back

Even in cases when a District employee does not pick up a reported bird, the reports are still very important because they still provide information to help the District conduct prevention and control efforts. Not all birds are tested but all reports are valuable.

The City of Oakley Planning Division is reminding the community that the Draft Oakley Focused General Plan Update document is available for review and comment.   A subpage that includes the draft document, several supporting documents, and the history of this update is available at the following link:  https://www.ci.oakley.ca.us/general-plan-update/  Planning Staff welcomes the public, outside agencies, and all interested parties to be engaged in this process.  Comments may be submitted in writing by letter or email to Ken Strelo, Principal Planner, 3231 Main Street, Oakley, CA 94561 (strelo@ci.oakley.ca.us). 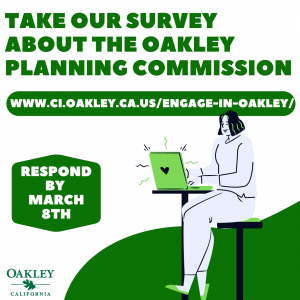